by Nigel Franks
As anyone who lives in the countryside in France knows, hunters can be a big problem. Barely a week goes by during the hunting season without a news report of them killing or wounding someone, or of them killing a pet or some livestock which they misidentified as a game animal.It is possible under certain circumstances to make your property a “refuge de chasse” which means that hunters are not allowed to hunt there. Effectively you give your hunting rights to an association for the protection of animals such as ASPAS (L’Association pour la protection des animaux sauvages) or the LPO (Ligue pour la Protection des Oiseaux). The association doesn’t use those rights itself and doesn’t let anyone else use them, so hunting is prohibited. 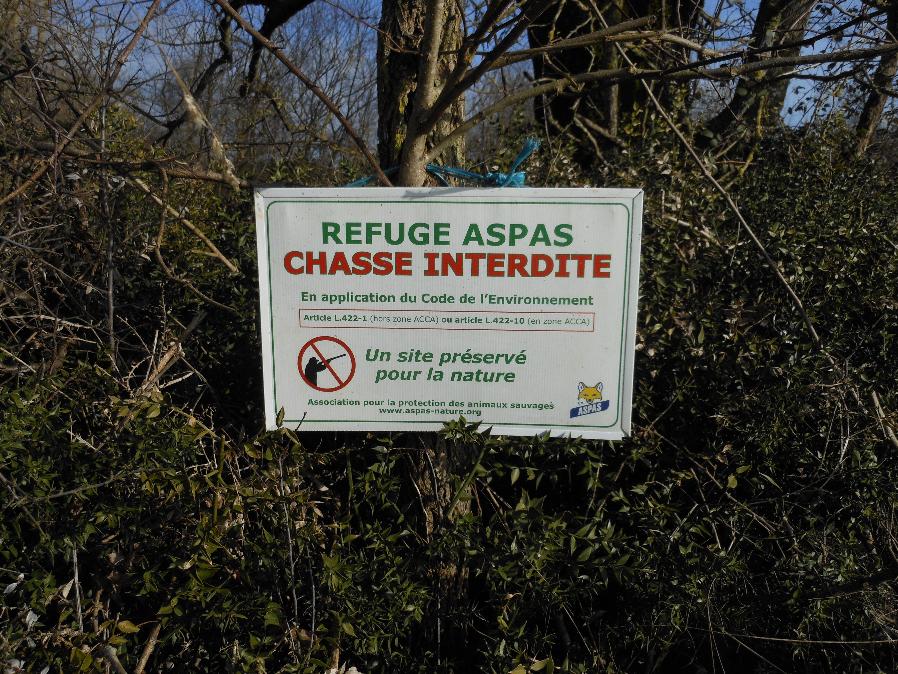 A sign saying “refuge de chasse”: meaning that normally no hunting is allowed

This was made possible by a judgement from the European court of human rights. Before this decision, it wasn’t possible to prevent hunters from hunting on your land. The court considered that this was a breach of rights to property and to conscience. You can read the decision here: http://hudoc.echr.coe.int/eng?i=001-62843A few years ago we carried out this procedure for our land. Naturally the hunters were not happy and let us know it. They still come as close as possible to our house so that we are disturbed by the sounds of their shots and the barking of their dogs.Unfortunately even if you create this refuge de chasse then hunters can still hunt on your land if they can get a “battue administrative”. This is a “beat” ordered by the authorities with the intention of clearing a sector of some animals. It’s often carried out under the pretext of the animals causing damage to crops or being a risk to traffic. They don’t actual have to have done any harm. It can be carried out preventively. And then all your rights disappear. With no warning a group of hunters and a few officials can turn up on your property and start hunting. And if you try to stop them, they will tell you that you’re breaking the law and face a prison sentence or a hefty fine… the worst thing is that they are not lying about that.
That’s what happened to us on the 15th of January.Our property of about 3.5 hectares is roughly a triangle. As you can see from the picture below it has a major road on one of the smaller sides, a minor road on the other small side and a field on the longest side. 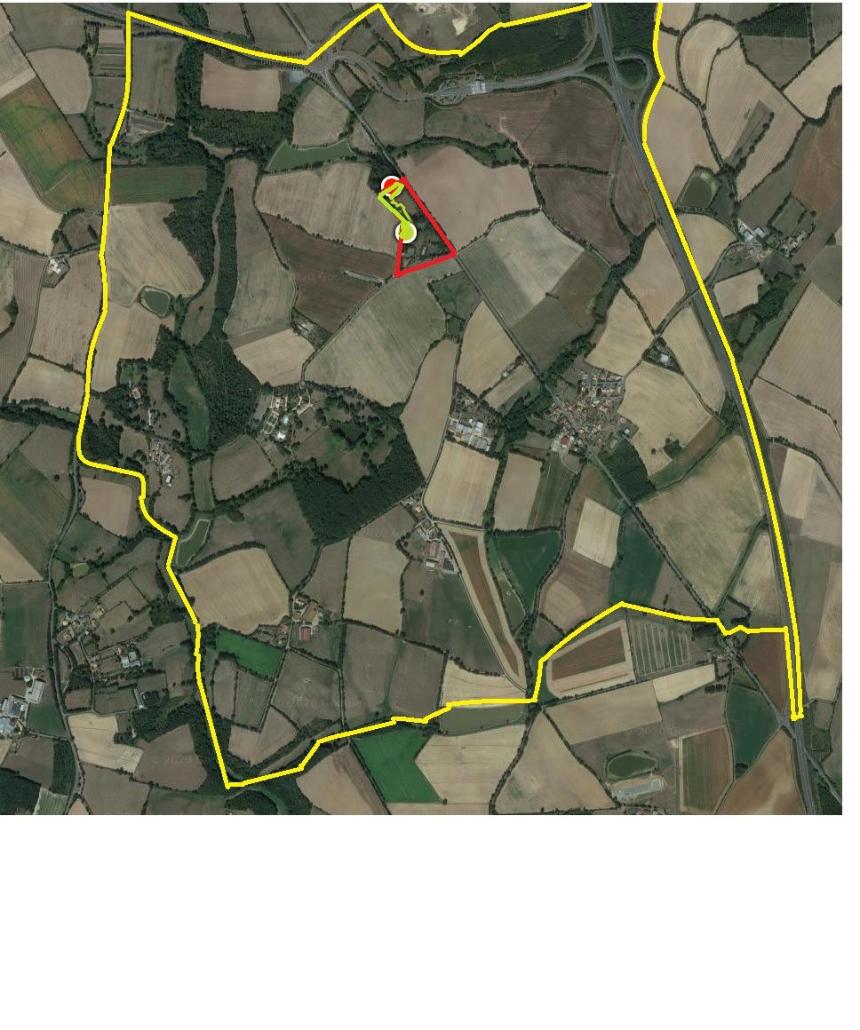 Yellow shows the perimeter of the area, red our land and green the line of the hunters who stayed.

Three officials appeared at our gate at about 9h30 and told us that these was a battue administrative on wild boar and that they were starting at our property and we couldn’t stop them. You can imagine our reactions. 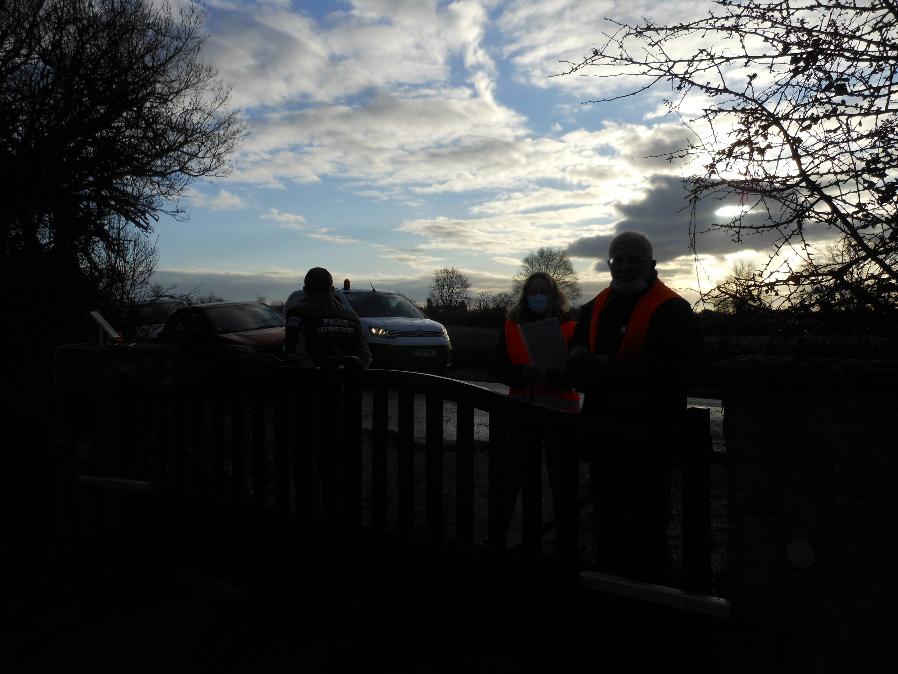 To cut a long story short , mainly to avoid having to relive the terrible experience… the arrêté, the administrative decision, was published at the town hall on the 13th of January. You’re expected to know about these things as there is no obligation to inform the landowners in the area. In fact the officials at our gate seemed to expect a pat on the head because they spoke to us before unleashing the dogs and the hunters, of which there were dozens.From what we could see the hunters split into a number of groups. One group took some dogs into the field next to our land. They didn’t appear to be armed except for one who carried a lance! 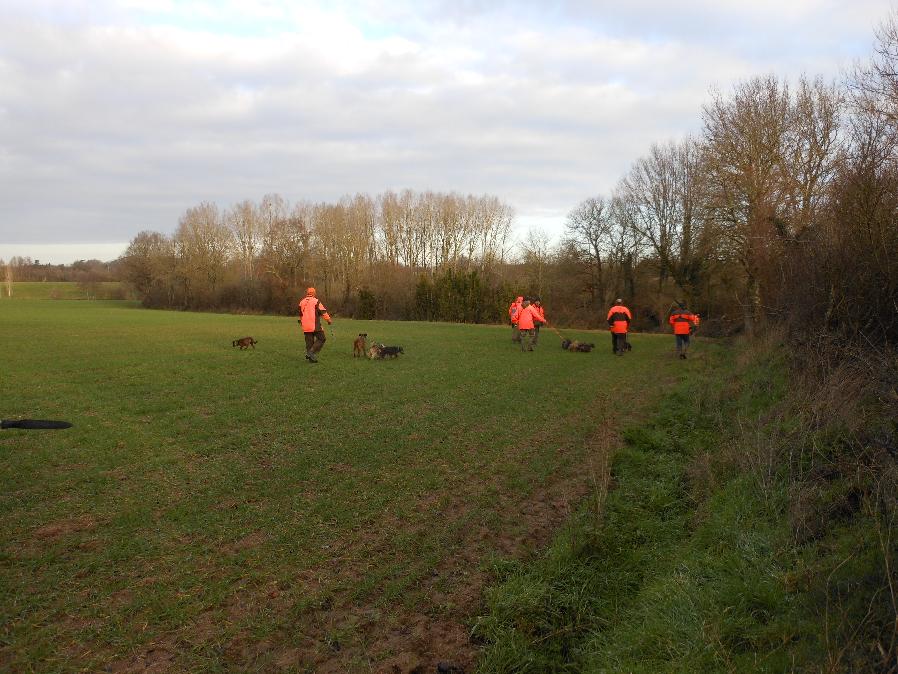 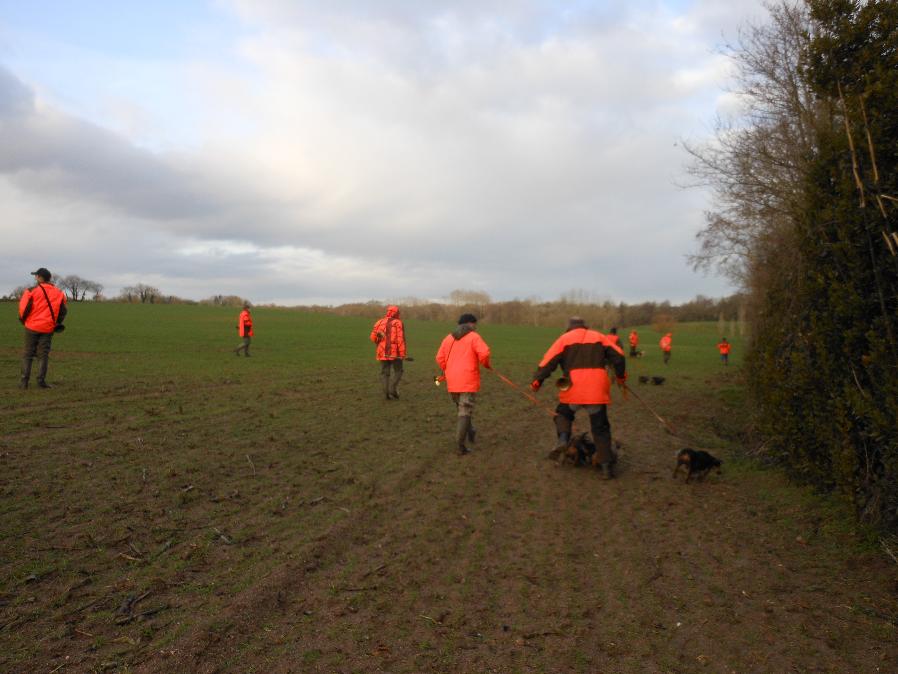 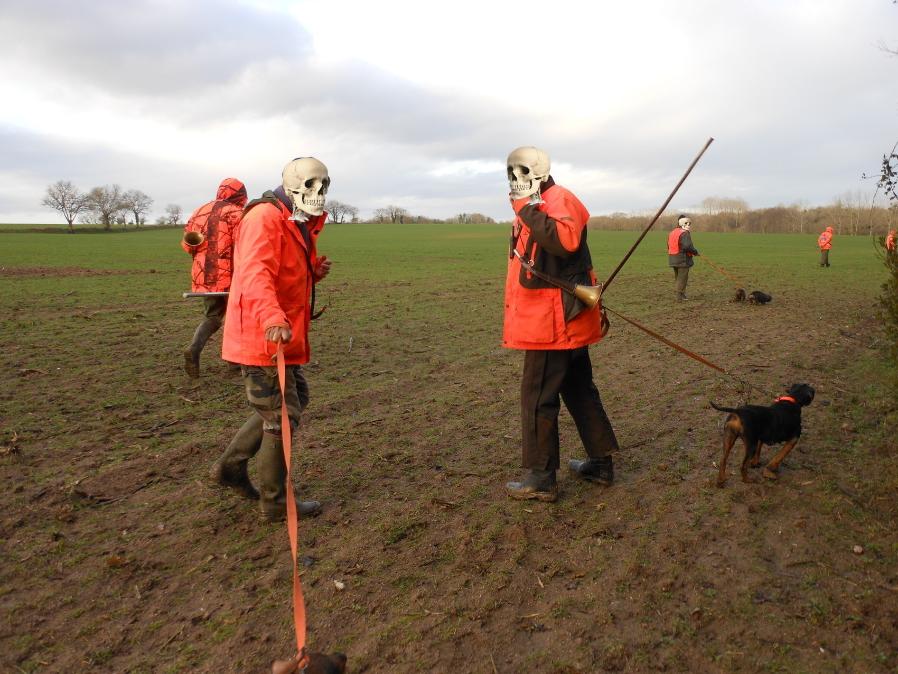 Hunters with dogs on the field next to our hedge. 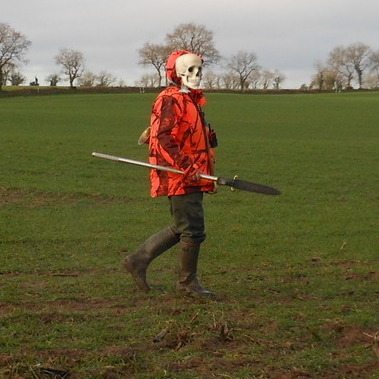 Some with guns stood on the opposite side of the major road, mostly out of sight behind the hedgerow. Behind them were mostly open fields and à motorway about 800m away, You can just see a bit of it down the right hand side of the picture above. The yellow line is the perimeter of the area concerned, it extends beyond the edges of this picture. And yes, your eyes are not deceiving you: it does include a motorway, its tollbooths, a bit of dual carriageway and a roundabout! 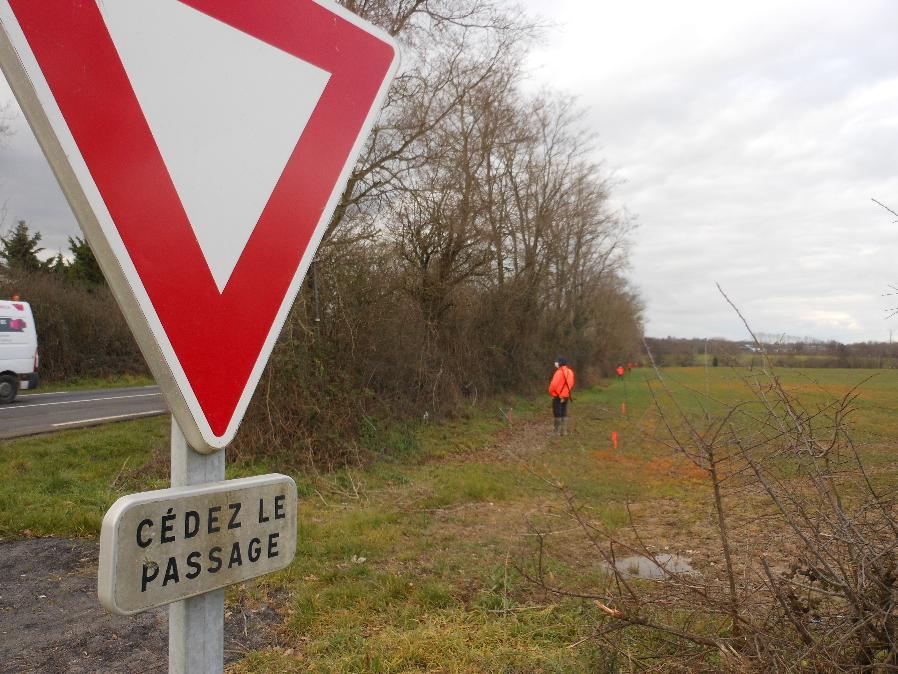 It seems that the intention was for the hunters in the field with their dogs to scare the wild boar off our land towards the hunters waiting with guns on the other side of the main road… spot the errors:- There was a risk that the panicked animals and the dogs chasing them would cause an accident on the road.- If the hunters with guns shot at the animals as they were crossing the road, then they would risk hitting traffic, the dogs and the hunters who had unleashed the dogs.- If the armed hunters fired when the boar were passing between then, then they could hit each other.- If they fired after the boars were past them, then they were firing in the direction of the motorway!
Luckily it appears that no animals went that way, as we heard no shots. In fact we have no real idea as to the fate of the animals that were being hunted.

On the images on the video above, taken by one of our wildlife cameras (there are about 8 of them) you can see how a dog chases a boar in the direction of the road.

Eventually most of the hunters disappeared into the distance towards the woods, left of our land as shown in the picture. We took a moment to draw breath and heave a sigh of relief, then we walked around our land to see if any of the fences had been damaged.
Once we got to the main road we were surprised to see that the hunters with guns, about 6 or 7 of them, were still in place on the opposite side of the road. Their position is shown as that green line in the picture. As you can see it is directly opposite our land and the little bit of wood attached to it and is about 450 metres in length. Yet any animals being chased from the woods on the left of the pictures could have run towards that road and crossed it at any point along a stretch of about 3 km. I leave it to your imagination as to why the hunters stayed only opposite our land. 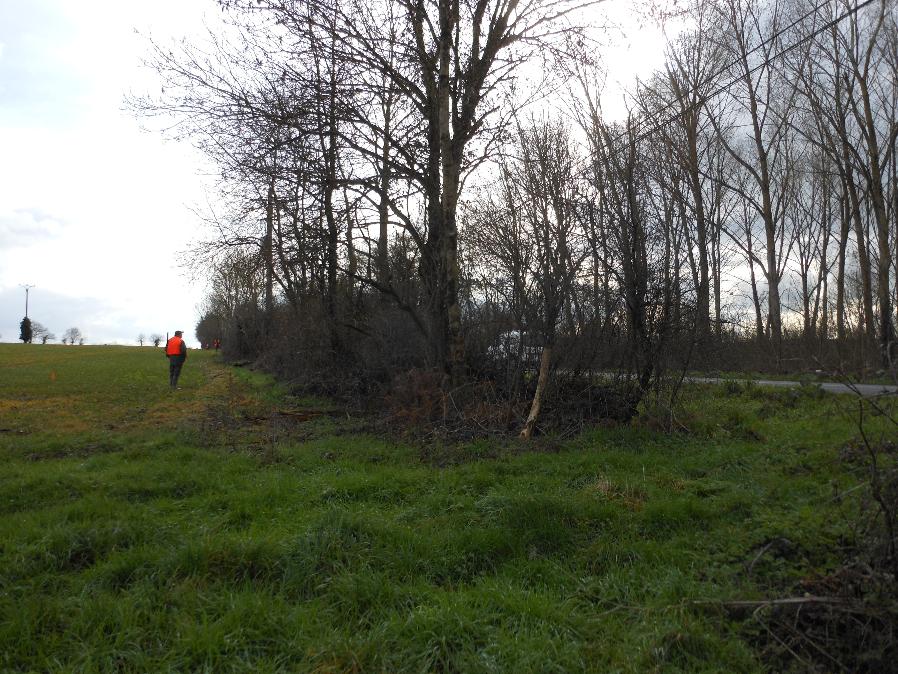 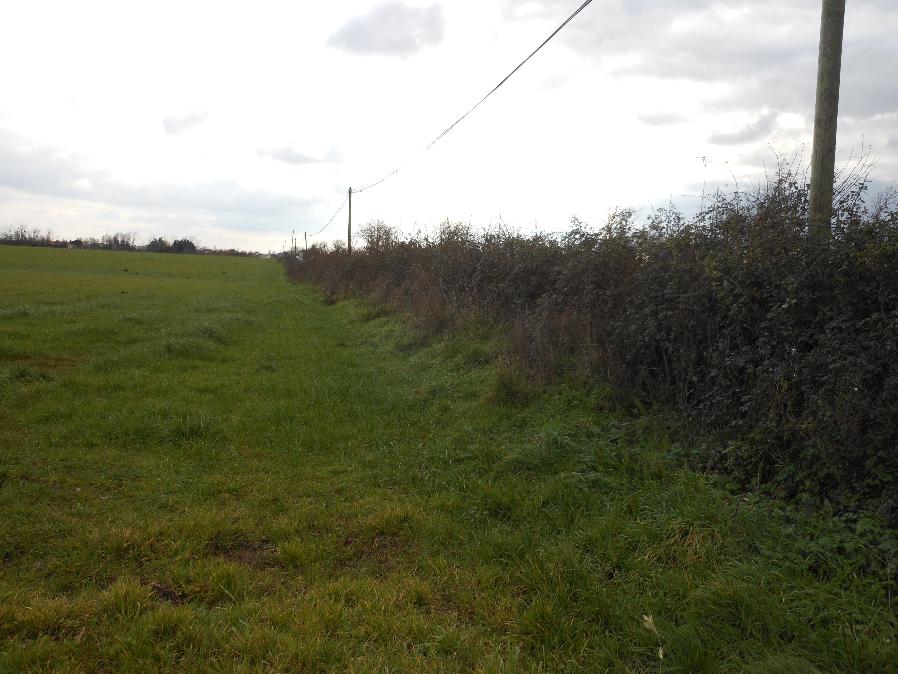 Another issue that provides food for thought is that the area in which this “beat” was authorised covers at least 600 hectares. And the hunt started at our tiny 3.5 hectare place, as far as we know, the only place in that area which is a refuge de chasse, where normally no hunting is permitted. In addition it’s almost in the middle of the targeted area. This is something that I can’t get my head around. If you start a hunt in the middle of the area, the animals will try to flee in all directions.
Wouldn’t it make more sense to start from one end and station the hunters at right angles to the expected escape route of the animals? Then the animals would pass in front of each hunter meaning that there is virtually no risk of shooting another hunter. Or perhaps put some mobile towers manned with hunters in the middle of an open field and force the animals to leave the bushes and woods and head towards the towers and the guns?
We are also surprised that the authorities didn’t contact us in order to find a less dramatic solution. If they really believed that our land harboured huge numbers of wild boar why didn’t they ask us to fix gaps in our hedges and fencing and/or clear the areas of brambles where the boar could possible shelter?
One could be forgiven for wondering if hunting animals was the main purpose of this “beat” and the upset and stress that it inflicted on us was not a regrettable side effect.
Because do not be in any doubt: this was very stressful and upsetting. It’s not just the noise of the dogs, the frenzied shouts of the hunters, their horns, the shots , nor the sight of all the panicked animals. It’s also the feeling of helplessness and the sense of violation, that your basic human right to enjoy your property and your basic human right to your beliefs can be taken away by the stroke of a pen.
And it’s not over yet, because the arrêté allows these hunts for a period of two weeks. The “battue”” is organised by the Departmental Service for Territories and the Sea. Amongst others they and the local town hall are required to be informed at least 24 hours in advance if a battue administrative is going to take place, so were going to have to phone them every day to enable us to take precautions to ensure that our own animals are safe. And by every day, I mean every day: a battue administrative can be organised at any time with only 24 hours notice, so it’s the only way that we can be sure that all our animals are safe. As I write this, one of our cats, Fidgi, has not been seen since the battue. We hope that he is safe and will return. 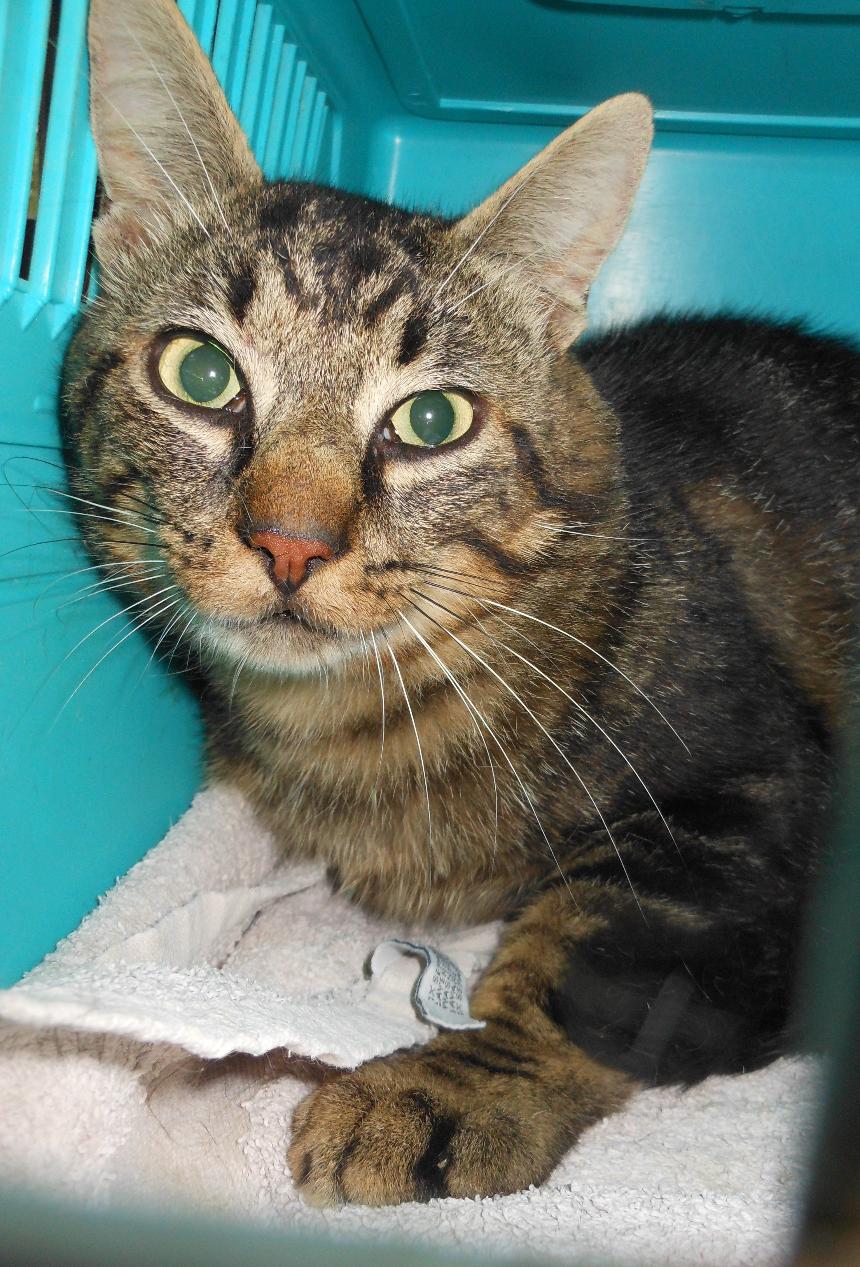 What actions can you take?

What actions can anyone legitimately take if such a situation occurs again, without risking a fine or jail? If it happens to us again, we will read the arrêté to make sure that all its requirements are adhered to. We will check that the organiser has informed in advance everyone who the arrêté requires be informed. That may include the police and the town hall, so we have their numbers already stored in our mobile phones so that we can call them. The town hall has an emergency number that is reachable outside office hours. We will ask to be shown a list of all the participants and will check the identification of all of them and check that they have their hunting licence with them. This is in order to prevent unauthorised people taking advantage of the situation to gain access to our property. We will also ask if anyone is under the influence of alcohol, narcotics or prescription medicine that could affect their judgement and/or their aim. If we smell alcohol then we will ask the police to check them. Hopefully this will give us enough time to bring our animals to safety.
In the long term, the law has to change. We no longer live in the 15th century when lords ruled the land and the peasants had no voice. Everyone’s fundamental rights have to be protected. Especially when they can be trampled on for such a trivial pretext. In the 21st century we have alternatives to just killing, for example fences or sterilisation or maybe simply just by preventing hunters from encouraging wild boar or even breeding them and releasing them.
Denying people their rights to the peaceful enjoyment of their possessions and their freedom of thought and conscience in order to save a few Euros worth of damage to crops is a disproportionate use of state power. We’re going to fight this… so please come back to this site for the news.... 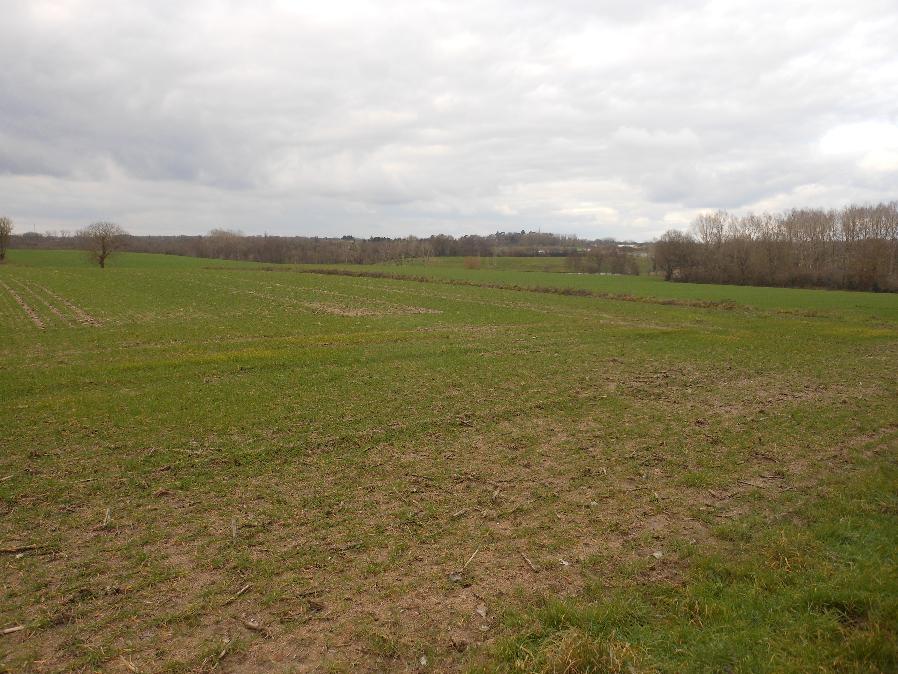 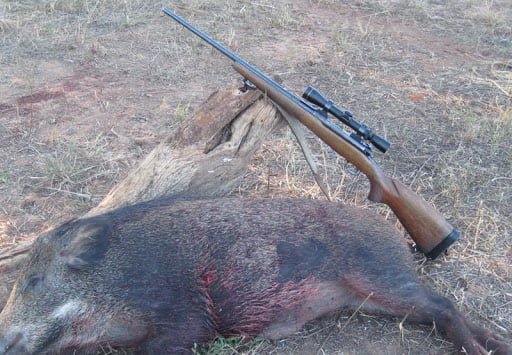