Sentience:  Where did it come from?
I think that it's pretty obvious that sentience is hereditary: you can't learn to be sentient. So that means that it is an evolved trait, passed down from parent to offspring.
No one knows exactly how evolution works but mainstream science has a pretty good grasp of the fundamentals. Here's my rough and ready interpretation...
Every generation differs slightly from the one before, because of changes in the genome. Some changes are caused by sexual reproduction, where the offspring inherits some characteristics from each of its parents which creates a new mix. Some changes are random because of mutations or errors during repair, etc. These changes can either be beneficial, neutral or harmful to the new organism. This is where the theory of natural selection comes into play. Beneficial means that it gives the individual organism a better chance of reproducing compared to its peers. If the organism survives and reproduces and the change is beneficial, it may be passed on to its offspring, who in turn will pass it on as they are also more likely to reproduce. So this changed genome becomes more common.  This is the basis of the concept of natural selection for increased fitness to survive and reproduce. If a change is not beneficial, then less organisms will survive and reproduce, so the genome becomes rarer: it is "selected against".
Interestingly, because the ecosystem can change, traits that are beneficial at one time may become harmful later and harmful or neutral traits may become beneficial.
There is no "Higher Purpose" behind this natural selection. The same results are reached by different routes.
Compare the human eye and a fly's eye: both are solutions for vision. And what about flight: insects do it with four wings, birds do it with two using feathers on the whole arm, whereas bats do it with a membrane stretched between adapted fingers. None of these solutions evolved suddenly, but rather by a slow process as existing features changed over many generations.
For sentience to have occurred, the physical structure on which it is based must already be present. The debate about whether animals are sentient too, exists because we don't know exactly what physical structures are necessary.  If I understand correctly, the argument of those who believe that only humans are sentient is based on the claim that only animals that have brains exactly like ours are sentient. That strikes me as being very unlikely...

We know that we are not the only species of humans to have existed even though we are the only one that seems to be around today. So when did our first ancestor become sentient? Of course it all depends on what you use to define sentience. We only have the evidence of the fossil record, so we can't tell if they had a language, could recognise themselves in a mirror, solve mazes etc. We do know that they used tools, as they have often been found next to their fossils. What differentiates their tool use from  a crow or a chimpanzee is that they used tools to make other tools. This is evidence of abstract thinking and skill, knowing where to hit a stone with a hammer stone to make a useful tool. Such tools are associated with fossils of one of our ancestors, the hominid species Australopithecus, from over 3 million years ago. https://en.wikipedia.org/wiki/Stone_tool
We don't know what their brains looked like, but from the size of their skull, we know that they were about one third the size of a modern human's. That would seem to show that if you accept that using tools to make tools is a sign of sentience, then a brain just like ours is not necessary. This is also supported by the evidence of other descendants of Australopithecus with different sized brains who had similar and even more advanced skills but became extinct.
I also have some difficulty believing that only humans had the "luck" to become sentient. Remember that natural selection takes place at the level of changes in individuals. So at some period in time one single individual (or perhaps more if identical twins, triplets etc) became sentient and was able to reproduce. And we're expected to believe that the only species alive today, that is a descendant of that individual, is us? 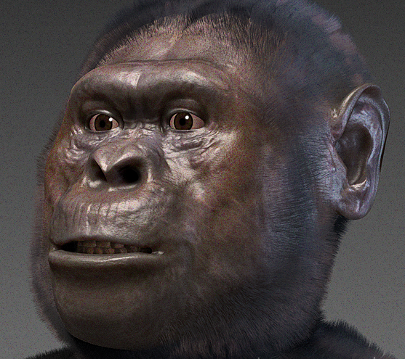 Australopithecus afarensis
Source: Wikipedia
We've seen that evolution follows (or perhaps more accurately creates) different pathways to similar ends. What evidence is there for believing that of all the hereditary traits, sentience is the only one that can be reached using a single pathway?
I believe that it is more reasonable to go much further back in time before Australopithecus to find the ancestor who first developed sentience. An interesting idea called the Attention Schema Theory has been put forward:
http://www.theatlantic.com/science/archive/2016/06/how-consciousness-evolved/485558/#article-comments
If I understand correctly, it goes something like this: an organism constantly receives information from its senses. If all information is given the same priority then conflicting inputs would mean that nothing gets done: so the nervous system developed the ability to process signals by competition between neurons, allowing the neuron with the strongest signal to dictate behaviour.  This selective signal enhancement predates the development of the brain and was present in various separate senses, such as vision, hearing and touch.
Next a central controlling structure evolved to regulate the priority given to each of the separate senses and direct "overt attention" to where it's necessary. This is a part of the brain called the tectum which developed about 500 million years ago. It appears that the tectum creates an internal model of where all the parts of the body are and allows movements to be carried out accurately and predictably. It points attention accurately and quickly to anything that seems important. The next stage is a system that can also divert attention to things that are not directly being sensed and make a response to them: this is "covert attention". This is done by the cortex in our brain and the wulst in reptiles and birds. This requires a more sophisticated type of model, able not only to respond to what is sensed directly and indirectly, but also to respond to what other things might do. This model also allows awareness of self, which is considered to be a sign of sentience.
This means that instead of sentience developing only about three million years ago and only being inherited by us, it developed hundreds of millions of years ago and is present in many species of animals. This idea is upsetting for many people who accept the exploitation of animals because they aren't really sentient. Of course, we will probably never know if the Attention Schema Theory is right, however, it seems to me much more likely than the claim of human exceptionalism whereby we set the rules of what constitutes sentience and, conveniently, we're the only ones who qualify. 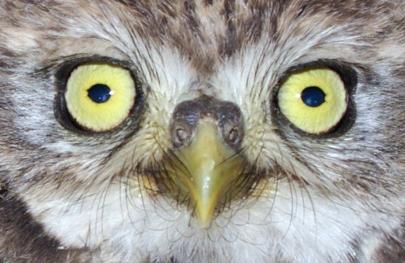 Human activities with regard to animals
MENU