About us
A couple made up of an engineer and an architect/lobbyist, we escaped the rat race and moved to rural France. We became involved in the field of animal welfare by running an association for the protection of animals ( NALA 85480 - Nos Amis Les Animaux 85480 ), mainly helping stray cats. Visiting a chicken farm started us on the road to becoming vegetarians and eventually we became vegan.
In the meantime, through contacts in the field of animal protection, we learnt more about the exploitation of animals and the cruelty that is inflicted on them. For example, France allows bull fighting and cock fights under the guise of tradition and permits the force feeding of geese and ducks to produce "foie gras".
Meeting animal activists who also ate meat made us start to question why some animals deserved more protection than others. It seemed strange that people who keep animals as pets consider themselves to be animal lovers, yet although they cherish their pets have no compunction about eating an animal of a different species.
When we were running the association, we “saved” about 50 animals per year. But it was very hard work: people would ring up at all hours demanding instant solutions, others would make appointments and then not show up, promises would be broken etc. There's a French saying that says, “Think how stupid the average person is... and then realise that half of them are even more stupid than that!” and we learnt that the hard way!
On the other hand there was a sense of satisfaction at seeing an animal rescued and placed in a new, loving home. We also met a large number of delightful people who genuinely love animals and we learnt a lot about the animal protection issues in France. We were amazed and shocked to find that bull fights are allowed in some towns in the south of France and cock fighting is allowed in the north.
As mentioned above, we became vegan, which saves about 200 animals per year. Between us that's eight times more than we saved working almost full time for the association! That realisation convinced us to set up this website: if it sets only one person per year on the path to being vegetarian, then it's more effective than our work for the association. 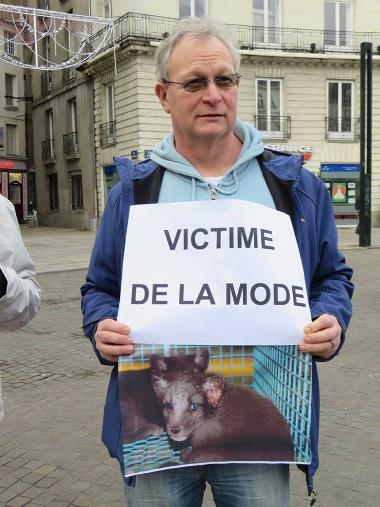 Nigel wrote most of the articles

Marit created the website and took most of the photos
Photos taken by Catherine Guilhou
Some vegetarians and vegans adopt a holier than thou attitude and look down on "less enlightened" people. We find this attitude to be elitist, exclusive, extremist and as a matter of fact it is even speciesist. There was a time when we weren't vegan, so we know that we're not perfect, therefore we don't expect perfection in others. In addition, it's easier to discuss things with people if you keep it friendly.
What you can do?
You can read about our adventures in
Our Blog
Or get to know more about
Our other Work
our vegan tour de france
our youtube account
NALA youtube account
Nala Bournezeau Youtube account
our dailymotion account
For any questions please send us an e-mail to
nala85480@hotmail.com
Now let's start with our definition of anti-speciesism
What is our definition of anti-speciesism?