Human activities with regard to animals and their implications (and why we should stop them)
Farmer asks for therapy for his depressed cow
A dairy farmer  from Vreeland, The Netherlands came to the farm 'The Lucky Buggers Family'  in  Amstelveen  with his depressed cow, as they are well known for rescuing farm animals. This was really a special case. The cow could not cope with the pressure to perform in the dairy  farm. She didn't fit in with the rest of the herd and became visibly very lonely. The farmer called her the "Sad Cow". Then recently - after an extremely difficult delivery -  her calf drowned. The cow stayed for days on end near the place where it died. She was on her own and grieving.
Because the sad cow had become a 'nuisance' to the dairy farmer she was going to be taken for slaughter. But instead the farmer called  'The Lucky Buggers' family' to ask if the cow could live there.  Dafne, the head of the family,  studied the sad cow case and discovered a way for the animal to get better. She came across a very lively, young bull calf, ready for departure to a cattle market and persuaded its owner to give her the little creature.
Now he and the 'Sad Cow'  live happily  together in 'The Lucky Buggers' family on the 'Promised Land of Pigs' which is what Dafne calls her farm. The first part of the sad cow therapy was successful: the lively little calf gave her back the will to live. Just by allowing it to drink from her!
Cow and calf are enjoying an experience that should be so normal.
You can read the whole story in dutch and see the photos on this site:
http://hiddenlives.yolasite.com/het-verhaal-van-de-trieste-koe.php 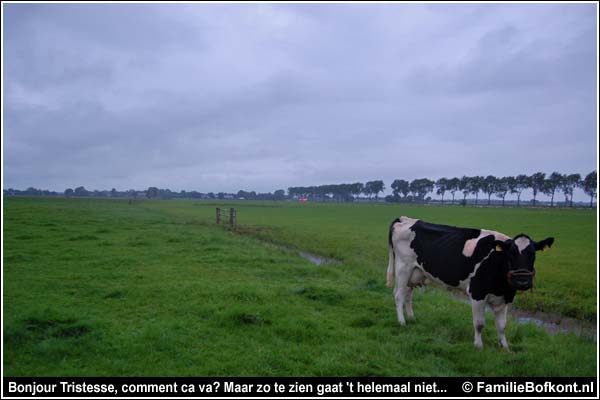 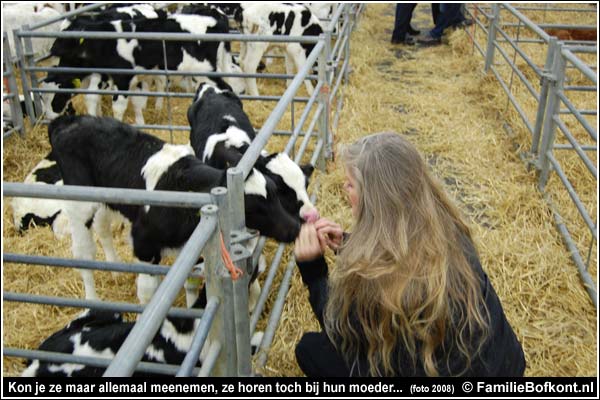 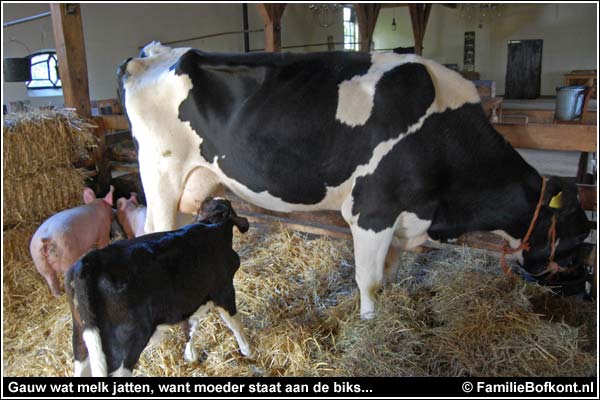 This is only one story of the many that you can find on the internet about dairy cows and the consequences of milk production. When I go to the gym wearing my "Meat is murder" t-shirt, people seem to understand what that means and that we don't want to have  animals killed for their meat. However when I wear my "Dairy has killed me" t-shirt with a calf on the front, I from time to time get very questioning looks.  Not everybody knows the connection between milk and the cow.
So let me explain. Just like with humans, to be able to give milk a dairy cow first has to give birth to a baby.  When the heifer is just over a year old she is inseminated with a bull's sperm. So how is this sperm produced? Methods vary. Some bulls mount frames covered in cowskin and ejaculate into rubber tubes with bottles on the end. Some mount other steers, called "teasers", only to be interrupted at the crucial moment by a man with an artificial vagina. Another method is to allow the bull to mount a cow and then extract the semen from the cow after ejaculation. If a bull needs help to perform, a spray that mimics cow estrus molecules can be used. A more painful way is electroejaculation which is used more and more. Electroejaculation involves applying a series of short, low-voltage pulses of current to the pelvic nerves which are involved in the ejaculatory response.
Wikipedia explains it very well: An electric probe is inserted into the rectum adjacent to the prostate gland. The probe delivers an AC voltage, usually 12–24 volts sine wave at a frequency of 60 Hz, with a current limited to usually 500 mA, although some devices can generate currents of up to 1 A. The probe is activated for 1–2 seconds, referred to as a stimulus cycle. Ejaculation usually occurs after 2–3 stimulus cycles.  This procedure  is usually not carried out with an anesthetic. It is recommended that the bull is restrained so that he cannot move from side-to-side or back-and forth. Bulls usually show an evasive reaction to this treatment and vocalise more frequently, but farmers tend to believe that this is not a painful procedure. We leave it up to you to decide. As far as we are concerned we believe in the saying: "Do unto others as you would have them do unto you !"
Giving birth to her calf is of course also quite a painful experience for the cow, as it is for a human mother. 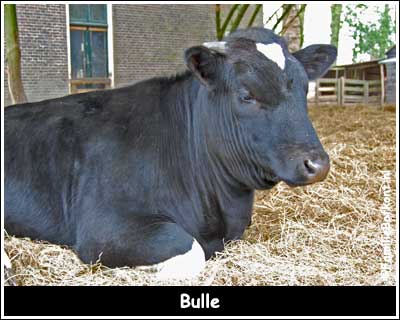 The calf of the story of the sad cow has grown up into this splendid bull, Bulle. When Bulle had his very first birthday he was still drinking from his stepmum.  Source :  http://www.familiebofkont.nl/
Some cows are treated with painkillers, especially when problems occur. Many are not. When the calves are born and are in good health (it is estimated that 2 to 5% of the calves are lost at calving time),  the cow and calf only stay together for up to 12 hours after birth. After checking the cow, she's put into another group, the main milking herd, and the calf goes to an individual calf hutch. The separation is a very stressful period for both the cow and the calf. Cows can be heard calling for their calves for days on end and can become quite aggressive when the farmer takes away the calf. During this period both cows and calves are more vulnerable to diseases. Lameness of cows is one of them and is very common in the first few weeks after calving. Each case of lameness costs a considerable amount of money, because the cow gives less milk and because of lowered fertility. Instead of treating it many are disposed of and sent to  slaughter.
Another welfare problem is Mastitis, an infection of the udder, which is very painful for the cow. In extreme cases, Mastitis can lead to death. There are many reasons why cows get this udder-infection, inbreeding, poor hygienic/sanitary conditions and high levels of milk production  are some of them. To try to improve udder and milk hygiene, in many farms  tail-docking is carried out without anesthetic which obviously is very painful. Which again has consequences for the cows' well being, because without a tail, the cow suffers more from fly infestations and bites, because she can't swat her tail to scare away the flies.
Cows with mastitis are treated with antibiotics which means that their milk has to be kept separately. There are big penalties against farmers who allow treated milk into the bulk tank. However just recently, in the USA a few farmers were slipping through a hole in this enforcement net. These farmers were using antibiotics that the routine tests don't try to detect, because the drugs aren't supposed to be used on dairy cows anyway.
So here again, to avoid all these problems and because cows are easily replaceable by new heifers, it is easier for the farmer to send these sick cows out for slaughter.
Whilst being miked, more than 10 weeks after having given birth, the cow is inseminated again to be able to keep the milk production high. So the cow is pregnant most of her milking life. A cow can, in normal conditions, live to be at least 20 years old. In dairy farms cows are disposed of after 4 to 5 years when milk production decreases.
Now what happens with the calves? If the calf is a female it might be kept and become a replacement for the main herd. The males are either shot or killed by other means at or just after birth. If not killed, it is sold from a week after it is born to 8 weeks when it's weaned,  to be reared for beef or rose veal. At the moment the prices of male calves are very low so in Europe many male calves are killed. 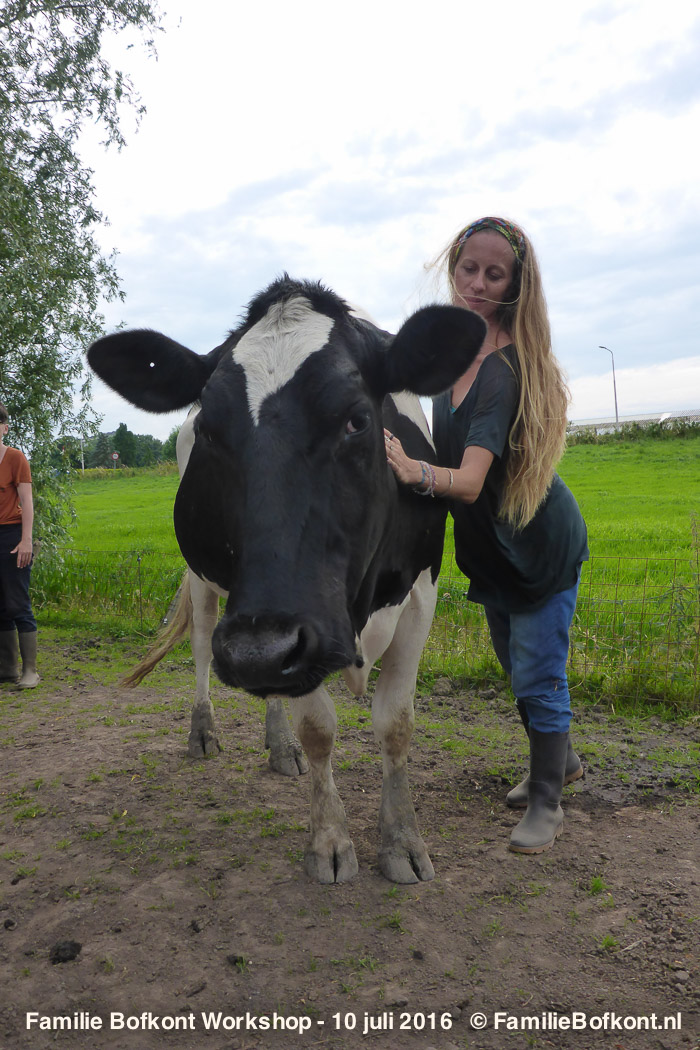 And here she is, the sad cow who is not a sad cow anymore.  :-) Source: http://www.familiebofkont.nl/
Where in the past, herds of cows were quite small, nowadays most farms have increased their numbers of cows and for practical reasons the cows are kept in big barns. In France we  have been following a case where a farmer got permission to build a  farm for 1000 animals, 500 cows and 500 heifers and calves.  Already after some months of operation an ex-worker leaked out information to the press that animals were exhausted, food was musty and mouldy, most cows were lame, animals were not treated and suffering and there was a high death rate: 2 to 3 cows  and 5 calves died each week. It is evident that animal welfare in these types of farms is not a high priority. And it always surprises us how farmers can pretend that animals are well cared for, knowing how hard it is to look after a large number of animals. Our highest number of chickens at one time was 45 and even then it was hard to keep track of every animals' wellbeing.
So in a nutshell, over the years  cows have become milk production machines with consequences for their health and emotional wellbeing and half of the calves have become a waste product to be disposed of. Reasons for us to leave dairy-products of our plate, especially as more and more replacements to cheese, yoghurt, milk etc are being sold in the main supermarkets.
If you would like to know more about dairy farming these  documents are interesting to read and very complete:
http://www.humanesociety.org/assets/pdfs/farm/hsus-the-welfare-of-cows-in-the-dairy-industry.pdf
http://agriculture.de/acms1/conf6/ws5ahigh.htm
Or you can watch this little  video: The dairy industry explained in just 5 minutes
Farming for leather and fur